Ports of straight-to-DVD movies <i>Barbie and the Magic of Pegasus</i> and <i>My Scene Goes to Hollywood</i> will hit stores in September.

Vivendi Universal Games is setting its sales sights on little girls this September with the announcement that it will be publishing two games based on upcoming straight-to-DVD animated Barbie movies. Barbie and the Magic of Pegasus will be released for the PC and Game Boy Advance, while My Scene Goes to Hollywood is getting dolled up just for the PC.

The adventure game Barbie and the Magic of Pegasus presumably follows the plot of the movie as Barbie takes the role of Princess Annika and attempts to stop an evil wizard that has turned her kingdom to stone. The game will include 20 levels of minigames, puzzles, and other obstacles.

In My Scene Goes to Hollywood video game, the My Scene girls--a Barbie spin-off line that includes the Barbie, Madison, Chelsea, Nolee, and Delancey dolls--create their very own movie, and players must help them write the script, design sets, and do the hairstyles for the production. In the end, the My Scene girls will attend the premiere for the movie.

Both games will retail for an estimated $29.99. 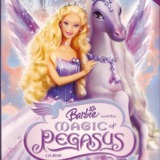 Barbie and the Magic of Pegasus
Follow
$19.99 on Walmart
Buy