Voltron: Defender of the Universe hitting XBLA, PSN in October

In February, THQ announced that it had partnered with Voltron license holder World Events Productions to develop new games in the franchise. Now, the publisher has announced the first title in the partnership, the downloadable Voltron: Defender of the Universe.

Due out this October on Xbox Live Arcade and the PlayStation Network, the title sports single-player as well as online cooperative play. Defender of the Universe--which will cost $10--boasts online co-op for up to five players, with each gamer suiting up as one of the five lions of the Voltron Force. Players can also team up to form Voltron and wield his mighty sword. Additionally, the game sports two-player local co-op.

The game is coming out in conjunction with Voltron Force, which will debut on Nicktoons in the US and will tie in to a pair of action-figure lines from toy maker Mattel. The first toys will be based on the original Voltron series and should arrive this year, with a Voltron Force-specific line scheduled for 2012.

Defender of the Universe is currently in development at Behaviour Interactive, the team behind the downloadable title Ghostbusters: Sanctum of Slime and film tie-in Rango. 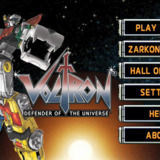