Pocket Paradise will launch day and date with Trouble in Paradise for the 360 next month.

Rare has already said that its next all-new installment in the Viva Pinata franchise--Trouble in Paradise--will be available exclusively for the Xbox 360 on September 2. What the developer failed to mention when it made that announcement in July, however, is that in tandem with that Xbox 360 release, the developer will also be bringing the THQ-published Viva Pinata: Pocket Paradise to the Nintendo DS.

Pocket Paradise reprises the original Viva Pinata, released for Microsoft's Xbox 360 in 2006. The portable outing features gameplay along the same lines as the original, in which aspiring horticulturalists will build up their virtual gardens by creating an attractive living environment for wayward pinatas.

In addition to a redesigned interface and new control scheme, Pocket Paradise includes seven all-new pinatas as well as 12 full-motion tutorial clips and Playground mode, in which players can accelerate the development of their gardens. The DS game will also make use of the portable's Wi-Fi functionality, making it possible to swap pinatas locally.

Both Viva Pinata: Trouble in Paradise and Pocket Paradise will surface in North America on September 2, with their European rollouts penciled in for September 5. 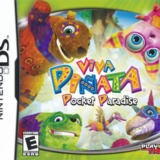