Virtua Tennis 3 Served Up in Leipzig

We recently honed our skills on the tennis court at the Leipzig Games Convention, where Sega is showing Virtua Tennis 3 on the Xbox 360.

When you think of Eastern Germany, you probably don't think of tennis. But for this week the rural surroundings of the small town of Leipzig have become home to all manner of sport, combat, adventure, and role-playing with the arrival of the annual Games Conventnion. One of the activities available behind closed doors in the Sega booth is a friendly game of tennis. We played a few sets against a computer opponent in the upcoming Virtua Tennis 3 for the Xbox 360.

If you've played any of the Virtua Tennis games in the past, you'll feel right at home with Virtua Tennis 3 on the Xbox 360. It's still essentially a one-button game, but that doesn't make it easy by any stretch of the imagination. Instead of complex button presses, the game emphasizes movement and positioning above all else. Instead of just smashing the ball in your opponent's direction, the key is to carefully place your shots to get your opponent to move. Then you have to position yourself so you can return the ball as quickly as possible while your opponent is off balance or out of reach. It's a fun and often dramatic system that requires more than just quick reflexes, but plenty of forethought as well.

To move your character onscreen you use the left analog stick, and to swing you use the X button. By holding the X button prior to making contact with the ball, you'll charge up for a more powerful swing. This takes finesse, though, as you'll often find yourself scrambling to reach the ball with very little time to charge up your shot. That's dangerous, because a lob is an easy setup for your opponent to overpower you with a smash.

The type of swing that you perform is based on your player's relationship to the ball. If a ball is almost out of reach, your player will automatically dive to hit it. In doing so, he'll fall down or end up way off balance, which makes returning the next shot especially difficult. When you hit the ball you can use the left analog stick to aim the shot to the left or right. An important skill in playing Virtua Tennis 3 is being able to place the ball as far away from your opponent as possible on every return. It's not easy, especially when you're in the midst of a heated volley.

Virtua Tennis 3 comes with all the standard modes of play, including create-a-player, career, match play, online versus, and minigames. In career mode you compete in tournaments against real-world tennis players and earn money that you can spend to purchase a wide variety of licensed gear and apparel. Sega is keeping quiet about the specifics of the multiplayer game thus far, but you can expect to see some sort of online tournaments and a ranking system. As far as the minigames go, you can expect to see 10 brand-new games this time around. Sega isn't releasing any specifics about the minigames yet, other than that they are all new games that you haven't seen in previous Virtua Tennis titles.

The graphics in the Xbox 360 version of Virtua Tennis look good, with excellent player animations as they dive for the ball or shift their weight to quickly change direction. The detail of the hair and clothing on the player models is also apparent, so you'll see touches like shirts that ripple in the wind as players sprint across the court. We saw only one of the courts in the game, but it looked just fine. There isn't tremendous detail in the crowds or background pieces, but you'll hardly have time to notice during a match. There are also multiple surfaces to play on, such as clay, grass, and asphalt.

Virtua Tennis 3 looks as though it's shaping up to be a fun game of tennis on the Xbox 360. The game isn't scheduled to be released until spring 2007, so be sure to check GameSpot often for further updates. While you wait, you can take a look at the recently posted from the game. 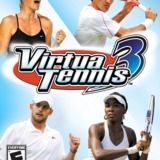