Sony and Microsoft execs, as well as developers Warren Spector, Cliff Bleszinski, and others, sound off on the state of violence in our favorite pastime.

At the 2012 Electronic Entertainment Expo, scenes of violence were spotted left and right. A new gameplay demo for God of War: Ascension showed Kratos rip the brain out of a giant elephant-man. And in a demo for The Last of Us, protagonist Joel used a shotgun to blow the head clear off a foe. 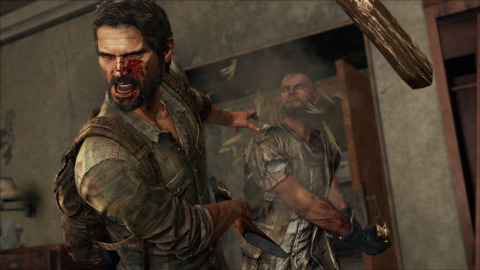 This Last of Us enemy is soon to lose his head.

Ubisoft touted Splinter Cell: Blacklist's "killing in motion," with Sam Fisher kneeing a man in the face, pumping a round into his chest, and then sending off a second shot squarely in his face. In a demo for Tomb Raider, Lara Croft shoots an enemy in the head with a bow and arrow, stabs a second man in the throat with an arrow, and finishes her killing spree by setting a group of people on fire.

Violence in games is nothing new. In fact, it has been around since the beginning, and along with it comes controversy. GameSpot senior editor Brendan Sinclair made his feelings known regarding the rampant violence at this year's E3, saying, "We're winding up with an era of games that are wallowing in savagery. And that's not evil, wrong, immoral, or irreparably damaging to the children. It's just boring."

But what about those who make the games? How do they feel?

GameSpot rounded up some of the industry chatter from developers and executives regarding violence in games. Highlighted below are thoughts from executives like Sony's software product development head Scott Rohde and Microsoft's entertainment vice president Phil Harrison, as well as statements from Deus Ex designer Warren Spector, Gears of War developer Cliff Bleszinski, and more.

For Rohde, violence in games is perfectly acceptable, so long as it is not violence for the sake of violence. The executive explained to GameSpot that with the advancement of technology, more realistic depictions of violence in games will become present, and this is true for the film industry and television, he says.

"There's a reason we have a ratings system for these games. And I think that you see this trend in Hollywood as well," he said. "You just see that as technology continues to grow, not just in our industry, but in the film industry as well, or even on television, I think you're gonna see a more realistic depiction of what's going on. And it's a way for people to escape. I don't think it turns people violent. But it's an interesting outlet for people to experience this, and let's face it: violent acts are what build the most tension; whether it's film or whether it's television or video games, and that was incredibly evident, specifically when we showed The Last of Us."

"I mean, God of War kind of gets up to this level [motions his hand above his head] and just stays there. But with The Last Of Us, you don't know what's coming around the corner. I literally get goose bumps just thinking about it [motions to actual goose bumps on his left arm] because that's exactly what Naughty Dog set out to build: a title where you are terrified to walk around every single corner because there was going to be some sort of encounter. And you had to figure out how to deal with it. So that's the view I take on [violence]. It's an important part of building tension and creating a new style of entertainment for people. It's not violence for the sake of violence; there's a big difference. It's not Saw. Really, the violence is creatively used to tell a story and to build tension. And that's extremely important." 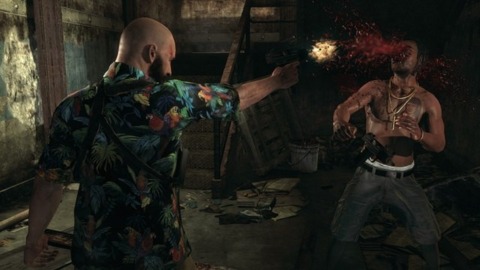 Is this bloody enough?

The outspoken Gears of War designer took to Twitter to relay his thoughts about violence at E3 2012. He said he was baffled by the response some had to the numerous scenes of violence at the show.

"What's with the backlash over the fact that some of the games at E3 were 'ultra-violent?'" he said. "There's room for all styles of games out there. Most games that rely on the violence as a selling point and nothing else tend to rightfully fail."

Speaking to Games Industry International, Spector said he believes such violence in games could have negative implications. He went on to note that he left Eidos Montreal (where he was instrumental in the production of the original Deus Ex) in 2004 because of the violence he witnessed from the publisher's lineup, specifically games like Hitman, 25 to Life, and Crash & Burn.

"We have to stop loving it," he said. "I just don't believe in the effects argument at all, but I do believe that we are fetishizing violence, and now in some cases actually combining it with an adolescent approach to sexuality. I just think it's in bad taste. Ultimately, I think it will cause us trouble."

"We've gone too far. The slow-motion blood spurts, the impalement by deadly assassins, the knives, shoulders, elbows to the throat. You know, Deus Ex had its moments of violence, but they were designed--whether they succeeded or not I can't say --but they were designed to make you uncomfortable, and I don't see that happening now. I think we're just appealing to an adolescent mindset and calling it mature. It's time to stop. I'm just glad I work for a company like Disney, where not only is that not something that's encouraged, you can't even do it, and I'm fine with it."

In an interview with Edge, Harrison said he was "surprised" at the new levels of violence put on display at E3 2012. The executive agreed with Rohde, saying the advancements made to technology have allowed developers to create more realistic depictions of violence.

"I was surprised, I must admit, at some of the games," Harrison said. "I think it's an inevitable progression of visual reality and visceral immersion that games can get quite ultra-realistic. Thankfully, everybody adheres to a very good ratings system, and makes sure that consumers are well-informed before they buy their games. I think it's more coincidental than anything. I don't think it's a strategy that everybody has adopted simultaneously. So long as it's part of a balanced portfolio, it's okay."

"One encouraging thing from E3 this year was all the online comments questioning the senseless violence in some upcoming games." -- Former Halo 4 director Ryan Payton.

"One encouraging thing from E3 this year was all the online comments questioning the senseless violence in some upcoming games," he said.

"I keep reading that this E3 was particularly focused on violence, but it didn't seem any different than previous years to me," he said.

"Silver lining: all that shitshow bloodbath of a day aside, Sony trumpeted support of & actually said the words 'indie games,'" he said.

"Is it irony, the way the games press complains about violence and sexism at E3, but hardly covers any of the non-violent, non-sexist demos?" he said.

You've heard what the executives and developers had to say regarding violence in games. What do you think? Have games gone too far? Not far enough?