If you haven't yet finished Glass Heart Games cosmic horror-inspired metroidvania, now may be a good time to jump back in.

Glass Heart Games has announced a new content update for Vigil: The Longest Night, titled The Bounty of the Night, is now out--and it's free! The update is currently live in the Steam version of the cosmic horror-inspired metroidvania, and will follow on Switch shortly.

Largely a quality of life update, The Bounty of the Night improves upon the game's map, making it easier to keep track of hidden areas you've already discovered and interior locations that you've explored. It also rebalances the game, buffing swords and axes so that they're more viable while also increasing the overall strength of certain enemies and bosses to compensate for the new in-game meta.

Beyond quality of life improvements, The Bounty of the Night adds new content to the game too. Over 50 new items and pieces of equipment have been added, 11 of which are brand-new weapons and special attacks. And for those like me who are hungry for new pieces of lore, The Bounty of the Night adds new documents to discover, allowing you to fill in some of the blanks concerning protagonist Leila's past.

Vigil: The Longest Night is an action platformer that takes inspiration from the design of games like Salt and Sanctuary and Castlevania franchise. The game sees you play as Leila, a hunter who returns to her hometown only to discover it's now surrounded by and under siege by monstrous beasts, drawing her into a long night of horror and death. 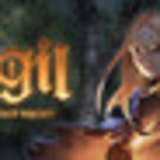