Viewtiful Joe released for the PlayStation 2

Capcom has released the PlayStation 2 version of its action game Viewtiful Joe. Originally released to critical acclaim for the GameCube last year, the cel-shaded game is rated "T" for Teen and can be picked up at retailers for $29.99.

Viewtiful Joe follows the story of Joe, an everyday movie geek who is magically sucked into an old Japanese superhero film. The PS2 edition of the action game differs from the original because of its inclusion of a hidden character. Players can unlock Dante from Capcom's Devil May Cry after playing through the game with Joe. The PS2 version also adds a supereasy "Sweet" difficulty setting, which was included in a Japanese rerelease of the GameCube game.

Capcom is currently working on a sequel to Viewtiful Joe, which will be released for the PS2 and GC simultaneously this November. For more on the PS2 version of Viewtiful Joe, see GameSpot's review. 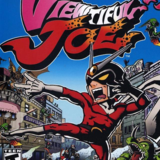