Capcom's crazy brawler comes to the PSP with new content in tow.

LAS VEGAS--Capcom's Viewtiful Joe: Red Hot Rumble is the PSP incarnation of the free-for-all brawler that shipped earlier this year on the GameCube. The game is a single- and multiplayer experience set in the Viewtiful Joe universe, with a host of familiar characters from the series of games as well as from the Kids' WB cartoons. The premise finds you duking it out in an unorthodox audition for the lead in Captain Blue's next cinematic opus. Though the game shares many elements with its GameCube cousin, Capcom has added some PSP-exclusive content to keep it from being a straight port.

The gameplay in Red Hot Rumble on the PSP remains true to its GameCube cousin and revolves around fast-paced battles on different, interactive themed "sets." The PSP game will also feature some new set designs. Control is kept simple, thanks to a solid base of moves that include a double jump, regular and special attacks, and VFX powers that you can use if you've collected the appropriate power-up. Each character will have a number of unique, special attacks. Speaking of characters, you'll find the same basic roster as the GC version of Red Hot Rumble, with one notable exception, Dante of Devil May Cry fame. Dante doesn't handle much differently than the other fighters, although his specials end up giving him a different feel in combat. Overall, based on what we played, the game seems to be close to the GameCube experience, for better or worse.

Red Hot Rumble will feature three modes: story, multiplayer, and trial mode. Story will follow your fighter's quest to "win" the audition. Multiplayer will let you play with up to three friends over Wi-Fi via the PSP's ad hoc mode. Finally, trial is an all-new mode and it's a series of minigames. Trial is a nice diversion from the main action that's fast-paced and well suited for gaming on the go. One other element of note is Red Hot Rumble's game-sharing support, which will let you play certain stages and characters using only one disk by transmitting the necessary data to your friends via Wi-Fi.

Viewtiful Joe: Red Hot Rumble is looking like it will share many qualities of its GameCube counterpart (which also includes its hectic pacing that makes keeping track of what's going on a challenge sometimes). The new content is a nice addition to the package and may end up giving it a bit more appeal than its console brethren. Viewtiful Joe: Red Hot Rumble is slated to ship this March for the PSP. 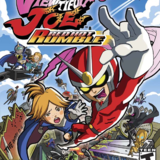