Capcom today announced that Viewtiful Joe 2 and Mega Man X8 have both been released for the PlayStation 2. The games showcase two of Capcom's comic-book-style heroes from the classic gaming days and the current generation.

Mega Man made his American debut in 1987 on the Nintendo Entertainment System, and has since been thrown back into action several dozen times on various consoles, selling more than 20 million titles in all. Also known as Rockman, Mega Man adds powers and upgrades acquired from fallen foes to upgrade his arm cannon.

In Mega Man X8, Mega Man nemesis Sigma has rendered Earth uninhabitable, forcing humankind to find a new home. Man invents the Reploids, a brand of robots designed to help with the transition. But Sigma finds a way to corrupt them, and they end up turning on their flesh-and-blood masters. To save humankind, Mega Man must travel to the moon and defeat the enemy.

In addition to Mega Man, the game features two other playable characters, both with their own strengths. Zero is well equipped for close combat and can perform a double-jump maneuver. Axl can hover and can fire a "spread shot." Gamers will be able to use a mix of the characters to defeat enemies and complete levels. The game will also feature multiple endings, depending on how the game is completed.

On the other side of the spectrum, Viewtiful Joe made his debut on the Nintendo GameCube in October 2003. The story follows Joe, a cinemaphile who is magically transported into the world of film as a superhero. In the stylized 3D/2D world, he becomes endowed with a range of powers on his quest to save his kidnapped girlfriend. In Viewtiful Joe 2, Joe's sweetheart, Silvia, joins Joe as a playable character. The heroes have a new VFX power--replay, which allows actions to be performed three times in a row--to aid them on their quest to defeat the evil Black Emperor. 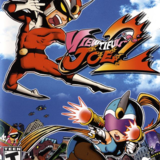