Electronic Arts may be one of the largest third-party publishers, but the publisher has been known to leak indie-minded talent. With the ex-EAers at Supergiant Games already gaining attention for the Independent Games Festival Award-nominee Bastion, a new group of company defectors have announced a downloadable release for their own IGF entrant.

Strange Loop Games' debut effort, Vessel, is set for release this holiday on the PC, PlayStation Network, and Xbox Live. The Seattle-based startup was founded by former EA developers John Krajewski and Martin Farren, and it will be releasing Vessel with an assist from indiePub.

A 2D puzzle platformer with an emphasis on liquid physics, Vessel tells the story of an Industrial Revolution-era inventor named Arkwright who creates a liquid life form he dubs Fluros. When the creatures go out of control, Arkwright must make use of the Fluros' various physical properties to restore order and ultimately create his magnum opus. According to indiePub, Vessel's weighty story will "[challenge] players' philosophical worldviews about the relationship between humanity and machine."

Vessel is set for release this holiday season and will sell for $15 (1,200 Microsoft points on Xbox Live Arcade). 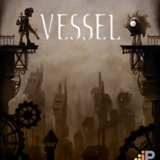