Local leader says he'll examine legal options to prevent the game's release, claims it could be "economically harmful" to the city.

North Korea. Venezuela. Las Vegas. A mutual disapproval of games makes strange bedfellows. Officials from all three of these places have decried games based within their jurisdictions.

In May, Venezuelan legislator Gabriela Ramirez called Pandemic Studios' upcoming shooter Mercenaries 2 " a justification for imperialist aggression." In the game, players drop into Venezuela to help settle an oil dispute, take on "a power hungry tyrant," and blow stuff up.

Back in 2004, Tom Clancy's Ghost Recon 2 was decried by the North Korean government as propaganda. In that game, a North Korean general diverts food to the military, eventually taking power of the country and invading China. It is then up to players to join the Ghost Recon team in repelling the invaders.

Now Las Vegas mayor Oscar Goodman is taking exception to the setting of another Tom Clancy game, Ubisoft's upcoming Rainbow Six Vegas. According to the Las Vegas Review-Journal, Goodman has an issue with the game's plot, which sees terrorists taking over a swanky casino on the city's Strip and seizing a number of hostages.

Goodman reportedly said the game was "based on a false premise," adding he has been repeatedly told by government officials that Las Vegas is "the safest place imaginable" when it comes to terrorist attacks. The mayor also said he'll look into whether or not the city can prevent the game from being released. "It could be harmful economically, and it may be something that's not entitled to free speech [protection]," Goodman is quoted as saying. 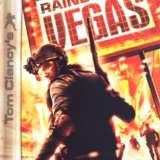