The massively-multiplayer-online-gaming market is about to get a little more massive. Sony Online Entertainment and Sigil Games Online have announced that the MMO role-playing game Vanguard: Saga of Heroes will be released in North America and Europe on January 30.

The PC game will be available in two editions--a $49.99 standard edition and an $89.99 limited edition. The pricier pack comes in a collector's box loaded with goodies, including the game's soundtrack, an art book, a cloth map, one hero card that grants a unique in-game item, and more. Those who preorder the game will get an invitation to the game's beta and live servers three days before the public, as well as an in-game scroll that boosts a character's sprinting ability. 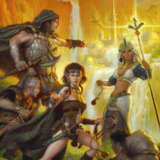