Vampire: The Masquerade - Swansong Is Releasing On Everything From Switch To PS5/Xbox Series X

The new narrative-focused RPG in the Vampire: The Masquerade universe will scale from Nintendo's handheld through to next-gen.

Vampire: The Masquerade - Swansong has been shown off in a new trailer during Nacon Connect, and while the trailer doesn't show any gameplay it has revealed an interesting tidbit about the game's release strategy. Swansong, which is described as a "narrative RPG" by developers Big Bad Wolf (The Council), will release for every current and upcoming major system.

This means that Swansong is releasing for PC, PS4, PS5, Xbox One, Xbox Series X, and Nintendo Switch. Considering the power difference between the Switch and next-gen systems, it will be interesting to see how the game scales.

Some screenshots for the game were also released alongside the trailer, and we've included them below. They are not gameplay shots, however.

The cinematic trailer released during Nacon Connect hints at a world full of blood-hungry vampires, and plenty of violence. We're not entirely clear what the game will look like in motion, though, or when it will release. Hopefully the Switch version will hold up against its much more powerful console counterparts. 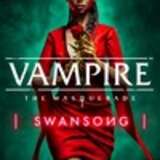