LAS VEGAS--Each year, the Academy of Interactive Arts and Sciences' D.I.C.E. Summit serves as a more exclusive, more posh brother to the standard stable of gaming conferences. Held at the Red Rock Resort in Las Vegas since last year, the confab's stated goal is to give industry movers and shakers a chance to exchange ideas and examine the latest business trends. It also provides an atmosphere more conducive to schmoozing and networking than the Game Developers Conference and Electronic Entertainment Expo. 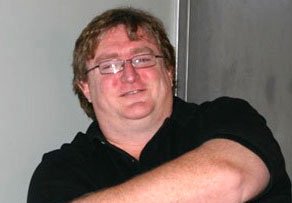 This year, D.I.C.E. kicked off with an opening keynote address on "Entertainment as a Service" delivered by Valve Software founder and managing director Gabe Newell. Although Newell's company is highly regarded by gamers for a lineup of hits including Half-Life, Counter-Strike, Half-Life 2, Portal, The Orange Box, and most recently Left 4 Dead, its most significant contribution to the gaming industry has arguably been Steam, the PC digital distribution service. For nearly an hour, Newell spoke to the assembled crowd of industry insiders and media about the sea change Steam--and some of its competitors--is making in the way people buy and sell games.

As an example of providing entertainment as a service, Newell pointed to one of Valve's own online shooters, Team Fortress 2. Newell said the company treated the launch of the product as just the beginning of a long-term service, one that includes not just bug fixes but also extra content for gamers, new achievements, and other perks. Since the game launched in October of 2007, Newell said it has been updated 63 times.

Part of the reason for its success, Newell said, was in the way the game's community has played a key role in shaping the product. Even though those updates were free for PC gamers, the designer said that Valve has still seen them translate directly to revenue in the sales spikes that accompany each significant update. Beyond that, Newell asserted that players have provided invaluable intelligent feedback to help shape the game and have served as evangelists to create new customers out of their friends.

Indeed, Newell said that the best way Valve has found to draw new customers to games is by creating a comprehensive entertainment service approach for existing customers. For example, Valve doles out guest passes to players of games like Team Fortress 2, which they can then give to friends so their friends can download and play the same game for a week. In such a promotion, it's the original customer's interest that his or her friend enjoys the game that helps spark new sales.

When asked by an audience member if he expects console makers to stand in the way of such direct interactions between game makers and consumers, Newell scoffed. That would be as bad an idea as limiting the console to just 2D graphics, Newell said, adding that he cares more about seeing the next-generation systems incorporate the sort of real-time feedback that Steam provides instead of better graphics.

Valve is also taking some business cues from its customers. Just as the customer base told the company what they wanted from Steam when the service launched in 2004, they're helping change the company's direction beyond games today. Newell said the customers want an entertainment company--not a games company--and that Valve has already started taking its first steps down that road with the Team Fortress 2 short videos released to promote the game's different character classes.

There's even a Team Fortress 2 comic in the works, and Newell insisted it will be made by the game's original creators. The Valve founder seemed less than thrilled with previous game-to-comic adaptations, saying this one won't be farmed out "to some third-party hoping to make a quick buck and take advantage of some opening weekend marketing push."

Returning to the subject of Steam, Newell pointed out that it gives Valve nearly instant feedback on who's playing its games, what hardware they're using, how many copies were sold through the service, and how many copies were purchased in stores. That allows Valve to experiment with its pricing and test different approaches with great frequency, something the traditional retail system doesn't allow for.

To prove his point, Newell talked about last weekend's Steam sale, which saw Left 4 Dead available for $25--half its suggested retail value. Sales of the game through Steam were better over the weekend than they were during a holiday sales promotion--or even during the game's launch week. In fact, Left 4 Dead sales were up 3,000 percent for the weekend, while new Steam users jumped 1,600 percent over the company's baseline. Anticipating a retort that sales like that undermine Valve's retail partners, Newell then showed graphs of the average Left 4 Dead weekend sales (as tracked through Steam, which is included in every copy at retail as well) and last weekend's, noting that both were about the same.

The switch from creating entertainment products to providing an entertainment service is a massive transition, Newell said, akin to the movie industry going from VHS to DVD to Netflix, or music jumping from vinyl records to CDs to iTunes downloads. And making the change promises to make companies more money with lower risk.

"We've been through this before, and we're going to go through it again," Newell said, "and I think it's going to be enormously beneficial to everyone in this room."

Check back throughout the rest of the week for GameSpot's ongoing coverage of the D.I.C.E. Summit.