The creator originally sent his proposal to Valve in a briefcase in the hopes of getting a job.

The fan-made standalone Half-Life game, Prospekt, has been OK'ed by Valve, the owner of the franchise. The game--which uses official Half-Life assets and carries a $10 price tag--is now up for preorder on Steam, with an expected release date of February 11.

This story of how the game came to be is quite interesting and somewhat unusual. Game companies rarely allow their assets to be used by fans, even if it's only for fun--but Prospekt is a commercial game.

Half-Life 2 modder Richard Seabrook, the creator of Prospekt, tells PCGamesN in an interview that he spent 18 months and "thousands of hours" working on the game. He even apparently shipped it to Valve as an optimistic job application in a briefcase with the trademark Opposing Force logo spray-painted on the side.

Seabrook never heard back about the unofficial sequel to Half-Life's Opposing Force expansion.

However, just 72 hours after putting the game up on Steam Greenlight in a move he called the game's "dying breath," Seabrook found that his game was approved by Valve. Later, he was able to get in touch with Valve to discuss release plans--this was all sorted out and now the game is nearly here.

Seabrook didn't say what kinds of deals were brokered with Valve for the use of Half-Life assets. But whatever the case, Valve will likely collect its regular cut of the game's sales when it's released.

Head to PCGamesN for the full interview with Seabrook, while more details about Propekt are available on its Steam page. 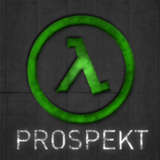