Valkyria Chronicles III not coming to US and Europe

The Valkyria Chronicles series was praised for its bold and fresh strategy role-playing games that were both beautiful to look at and fun to play. Fans of the series will be disappointed to know that Sega is not planning to localize the third game, Valkyria Chronicles III: Unrecorded Chronicles, for North American and European markets.

During a recent interview in Singapore, Sega's team manager of console sales, Hiroshi Seno, confirmed that the game would not be localized due to the PSP platform not being popular and well liked in North America and Europe. He also said that localizing the title for an English-speaking audience would require past games of the franchise to sell a particular quantity; he added that Valkyria Chronicles II did not sell enough to justify localization costs.

When asked whether the game would be out as a downloadable title on the upcoming PlayStation Vita system, Seno said the company would make a concrete decision the next time it meets with Sony. Valkyria Chronicles III sold 102,779 units in its debut week of January 24 in Japan. 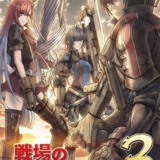