The challenging action-platform is also available on Nintendo Switch, PlayStation 4, and Xbox One.

Coffee Stain Publishing, the team responsible for bringing the sandbox multiplayer game Valheim to early access with developer Iron Gate, has announced that the action-platformer Huntdown hits Steam on May 12.

Huntdown is a 2D, 16-bit, run-and-gun action-platformer that runs at 60 fps. With single- and two-player local co-op, players control one of three characters to, as the name suggests, hunt down criminals like multi-armed mutants and ninja twins wreaking havoc on the neon-soaked, 80s-inspired streets. There's an air of challenge to the game, as players run through 20 levels to kill not just the target but a lot of goons on the way.

With the game debuting on Steam, developer Easy Trigger has baked in some new features that are available first to the platform. One such feature is a new Arcade mode, a score-based gauntlet that sees players attempting to top a global leaderboard. The other new addition is online multiplayer via Steam Remote Play.

Check out the official Steam release date trailer and some screenshots below.

Huntdown launched in May 2020 on Nintendo Switch, PlayStation 4, and Xbox One to critical acclaim. The game holds a score in the 80s across all platforms, according to GameSpot sister site Metacritic. However, it's unclear if the new PC features, Arcade mode and online multiplayer, will be available on these platforms. 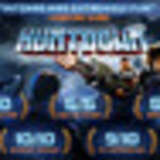