If players aren't happy with the state of traditional core-focused games, they have the used game market to blame, according to Frontier Developments founder David Braben.

Speaking with Gamasutra, the head of the Kinectimals studio and creator of vintage space combat sim Elite said gamers worried about casual titles succeeding at the expense of core games are misplacing their concern.

"The real problem when you think about it brutally, if you look at just core gamer games, pre-owned has really killed core games," Braben said. "In some cases, it's killed them dead. I know publishers who have stopped games in development because most shops won't reorder stock after initial release, because they rely on the churn from the re-sales. I won't buy a preowned game out of principle."

Braben said the used market was "killing single-player games in particular," as multiplayer modes can give a game legs that keep gamers playing them for longer, thus keeping them from being traded in.

"People will say, 'Oh well, I paid all this money and it's mine to do with as I will,' but the problem is that's what's keeping the retail price up--prices would have come down long ago if the industry was getting a share of the resells," Braben said.

Braben also confirmed that one of his studio's core-focused projects has been shelved. Braben said development has stopped on The Outsider, a spy thriller about a CIA operative framed for a crime, noting that "the story itself doesn't lend itself very well to being a multiplayer game other than as a tacked-on affair…" While Braben said he'd like to complete it eventually, he acknowledged it would be difficult to justify the risk at the moment. 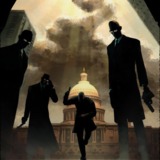