Although the action in the mid-'80s fighter Urban Champion was a little shallow by today's standards, the original Nintendo Entertainment System game is receiving a thoroughly modern injection of depth. Nintendo of Japan has updated its 3DS eShop release calendar with news that Urban Champion will join the system's 3D Classics line of titles on July 13.

Released in Japan in 1984 and in the West two years later, Urban Champion put players in the shoes of a blue-haired thug who must best a steady procession of green-haired rivals in unarmed combat. However, the contests of strength are often complicated by flower-pot-flinging locals, open sewer holes, and frequent police patrols. The game also includes a two-player mode so that 3DS owners can play head-to-head in local multiplayer matches.

Urban Champion will sell for ¥ 600, a little more than $7. It will be the second title in the 3D Classics line, joining Excitebike (which is free to download until July 7) on the service. Details for a Western launch of the game have not been announced. 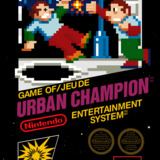