The bad news is Banjo-Tooie has been delayed. The good news is that another anticipated game has taken its place.

GameSpot will bring you extensive coverage of all these games as they near release. 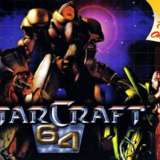