Fans angry about the lack of a Xbox release date reportedly harassed developers.

An upcoming Xbox version of the action figure shooter Hypercharge Unboxed is bringing the game back into the spotlight, but fans angry about the lack of a release date also provoked a statement from the developer.

Hypercharge Unboxed released on Steam in 2020, and is also available on Switch, but is currently ramping up for a major update and an Xbox release. As part of that ramping up, the official Twitter account has been posting footage of the game alongside calls to sign up for the game’s newsletter. Clips of Hypercharge, showing GI Joe-esque action figures bursting out of packaging and then combating other toys in a toy store, have repeatedly gone viral. That kind of attention can come with a dark side. The developers have reportedly come under harassment for not specifying a release date.

It's not okay to hurl abuse at us and demand a release date. pic.twitter.com/HB8uRtlTTv

In response, the Hypercharge team, Digital Cybercherries, released a statement on the game’s official Twitter account, condemning the harassment and emphasizing that developers are human beings. The statement says that the game is made by five developers and that the statement’s writer, Joe, is “the entire marketing department for Hypercharge.” Joe assured that the game will release on Xbox, that there is no release date because the team doesn’t have one yet, and that an ETA will come when the team is “comfortable with where we are in development and marketing.”

Hypercharge Unboxed offers PvP and co-op modes, alongside split-screen and online multiplayer. There are not official brand crossovers, but the game is playful with references. Many of its iconography is obviously inspired by pop culture stables, like green army men and LEGO. The action figures themselves resembled GI Joe, Mortal Kombat, and even characters from the action-comedy Small Soldiers. 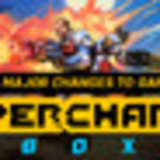