A release date for Chivalry 2's 2.0.1 patch has not been announced.

Torn Banner Studios has made a splash with Chivalry 2, its latest medieval combat title. However, anyone that's played the game since it launched on June 8 knows that it has some problems. Thankfully, a majority of those issues are being fixed in the game's upcoming 2.0.1 patch, including party and performance issues.

It's always more fun to charge into battle with friends, but doing that in Chivalry 2 has been a challenge. Simply getting your friends into one party has been difficult, with some connection issues only being solved by restarting your console or PC. With the 2.0.1 patch, those issues should be a thing of the past, with players appearing online correctly and visual indicators being added to show that a player cannot be invited.

Chivalry 2's performance will also be improved somewhat with the 2.0.1 patch, although mostly on Xbox Series S consoles. Once the patch is in place, the lightweight Xbox console will be able to run Chivalry 2 at 60fps, as intended. Some other issues related to player corpses and the Lionspire banner stag will also be addressed.

Torn Banner Studios has not announced a release date for Chivalry 2's 2.0.1 patch, or how large it will be. You can find a list of changes coming in the patch down below. 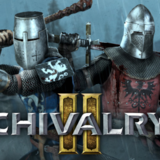