Until Dawn proved to be popular when it launched for PS4 in 2015, and now we know when fans can play its PSVR prequel The Inpatient. In a new trailer, publisher Sony has announced The Inpatient's release date as November 21.

The new video also shows off a little more of the game's setting, Blackwood Sanatorium, and hints at its story. Take a look for yourself below.

First announced at E3 2017, The Inpatient is set 60 years before Until Dawn. However, developer Supermassive has stated you won't need to have completed Until Dawn to enjoy this prequel. "It's an entirely standalone title with a brand new story and cast of characters to meet," the company said in June.

You play as a patient with amnesia being questioned by a mysterious man named Jefferson Bragg. "Over the course of the game you'll meet a variety of interesting patients and staff, each with their own motivations and agendas," reads a line from the game's description. "How you react to these characters and the choices you make will have profound and dramatic consequences for how the story unfolds."

Interestingly, NPCs will react if you speak out loud or make noises while playing the game, and you can see your character's entire body if you look down. Supermassive says this helps to create a more immersive experience. 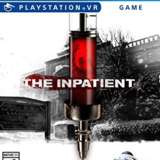