Midway today announced that Unreal Championship 2: The Liandri Conflict has shipped to retail for the Xbox. The game was copublished and developed by Epic Games, the North Carolina studio responsible for the widely used Unreal engine. This is the first Unreal game released since Midway signed a publishing agreement with Epic. The multiyear deal also gives Midway the rights to publish the next two Unreal games on the PC.

The series has long enjoyed a tradition of being one of the more popular first-person shooters on the PC, but this latest Unreal game on the Xbox is a bit of a departure from the tried-and-true formula. The Liandri Conflict now features an optional third-person mode and melee attacks. Players also have more freedom of movement, and they can perform acrobatic dodges and double jumps to reach hard-to-get places.

Unreal Championship 2: The Liandri Conflict is rated "M" for Mature and retails for $49.99. For more information, check out GameSpot's previous coverage, or check back later today for a full review of the game. 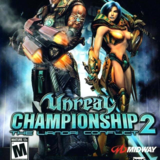