We take a look at the latest game in Square's long-running RPG series.

Traditionally, Square's SaGa series has occupied a rather odd position in the company's lineup. Square's more established series, such as Final Fantasy and the Chrono games, generally adhere to standard RPG conventions in terms of story, gameplay mechanics, and presentation. The SaGa games tend to stray a little from the beaten RPG path, though, and after spending some time with Unlimited SaGa on the PlayStation 2, we feel confident in saying that the latest game in the series has continued this trend. The game offers a unique spin on the RPG formula, with multiple playable characters, nonlinear storylines, and slightly unorthodox character and combat systems.

Like previous games in the series, Unlimited SaGa lets you choose from a multitude of characters at the outset, and each character will experience a unique version of the game's storyline as you progress. We chose to play as Armic, who's a member of the Chapa tribe and resembles nothing so much as an anthropomorphic squirrel. Armic's tribe of Chapa are suffering from a terrible drought, and their only hope to restore the life of their crops is to perform a rainmaking ceremony taught to them long ago by a mysterious traveler named Iskandar. To assist in performing this ceremony, four Chapa tribesmen are sent out into the world to recover a number of items necessary for the rite to succeed. Among the four Chapas chosen are Merito, the bravest, Qalesin, the most popular, and Spry, the wisest. Armic, the fourth Chapa chosen, is quite average by comparison and actually suffers from pretty low self-esteem, so he doesn't have the slightest clue why he would be sent on such an important errand. Nevertheless, he'll do his best to help out. Unlimited SaGa's overarching storyline involves the search for the seven wonders, ancient lost structures that are said to contain the old gods themselves. According to legend, releasing these deities will bring about a rebirth of a legendary golden age. While this plot certainly seems to overshadow the simple Chapa rainmaking ceremony, it's a safe bet that even Armic will play a unique role in the events of the game.

The interface in Unlimited SaGa will almost certainly be new and unique to fans of traditional RPGs. For one, the game features no real overworld to speak of. When you're in town, you'll see a static background representing your surroundings, and you move a cursor to the building you want to enter. Once inside a structure, you'll perform all functions, like buying items and talking to other characters, by selecting items from a simple menu. When you speak to non-player characters, both they and your own character are represented by large hand-drawn portraits, and the dialogue is displayed in simple floating balloons, à la the typical comic strip. The game does feature a bit of voice acting at key moments, and it seems to be pretty good so far, but for the most part the dialogue is text-only.

Roaming around in Unlimited SaGa's dungeon areas is also quite a bit different from what you'll find in most RPGs. You're not free to walk around in every direction, like you can in most games' dungeons. Rather, you're limited to a very narrow path, and you move one square at a time. Each step is considered one turn, and each time you land you have a chance of discovering an item or encountering an enemy. You can also "rest" for one turn in this mode, which will recover a portion of your hit points. Since you expend one turn by doing this, however, an enemy may wander by while you're sitting there and attack you.

Like the rest of the game, Unlimited SaGa's combat is little bit outside the RPG norm. The combat is turn-based, and you dole out commands for attacks and abilities to your characters as you'd expect. When a character is ready to perform a command, the "reel" system comes into effect. This pops up a quickly spinning wheel with a number of different icons on it, and you'll have to time your button press to land on the icon you want. Of course, the icon you end up with will affect the outcome of your attack or ability for that turn. Another interesting change to the formula in Unlimited SaGa is the way it handles hit points. Hit points decrease when a character sustains damage, but when his or her HP hit zero, he or she won't die. This is because HP act as a sort of buffer between enemy attacks and your life points, or LP, which are the real gauge of your character's health. You won't start losing LP until your HP have been drained, so as long as you can keep up your HP, your character can keep going. As mentioned, you can recover HP between battles, and both HP and LP are restored when you return to a town. It's a strange system, to be sure, but one that RPG fans may find interesting.

Judging from what we've seen, Unlimited SaGa is a game that emphasizes unique gameplay over flashy graphics and cinematic flair. The game is presented almost entirely in 2D--only the backgrounds of the battle scenes are made of polygons--but the art style is colorful and the backgrounds are well rendered, which makes the relatively motionless nature of the game's visual presentation easier to bear. Unlimited SaGa is currently scheduled for a summer release. Stay tuned to GameSpot for more coverage of the game. 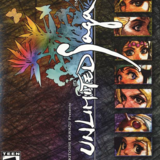