Universe at War to rage across PC, 360

When Shadowrun shipped for both the Xbox 360 and PC this month, the chasm separating console and PC gamers was at last traversed. For the first time, system warriors could frag each other in the same game irrespective of their platform. Today, Sega sends word that it too will participate in Microsoft's cross-platform initiative Games for Windows - Live with its upcoming real-time strategy game, Universe at War: Earth Assault.

To accommodate the commingling, developer Petroglyph will be implementing a variety of modes and gameplay balances. These multiplayer modes include the persistent-style conquer the world mode, where players compete in an ongoing struggle for complete control of Earth. And as with other Live games, Universe at War will feature achievement points, as well as other rewards and medals.

Universe at War: Earth Assault is slated for an October 2007 launch on the PC, but 360 owners won't be able to join the fray until the first quarter of next year. Check out GameSpot's previous coverage for more details on the game. 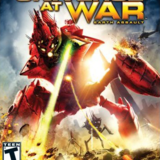