Uncharted 3 beta the biggest yet on PS3

Sony pulled the plug on the Uncharted 3 multiplayer beta today and set about tallying up the data collected since it launched late last month. According to the PlayStation 3 maker, the beta was the largest test period the system has ever seen, with 1.53 million players involved.

In 362 cumulative years of match time, Uncharted 3 beta testers fired 48 billion shots, killing each other a total of 1.9 billion times, which works out to an average of 1,200 kills per player. Sony tossed out a couple more stats, saying testers completed 22 million matches, racking up $1.9 trillion in in-game cash.

When it arrives on November 1, Uncharted 3 will focus on protagonist Drake's search for a lost city, with the wily adventurer finding his way to the Arabian Peninsula and its bleak Empty Quarter. In addition to the new multiplayer overhauls, the game will feature stereoscopic 3D capability, new stealth and melee maneuvers, and more. The game will debut alongside the first novel based on the series, Uncharted: The Fourth Labyrinth.

For more on Uncharted 3, check out GameSpot's previous coverage. 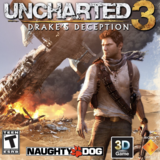