London 2012 holds onto first place; Batman, Spider-Man, Mario, and Sonic duke it out further down the top five.

There was no movement at the top of the UK sales chart last week, with official Olympics tie-in London 2012 holding firm at number one, Lego Batman 2 still at number two, and Mario & Sonic London 2012 Olympic Games still at three.

Fourth place also goes unchanged, with Batman: Arkham City fending off The Amazing Spider-Man, which rose from number seven to number five thanks to the 15 percent boost in sales that accompanied the launch of the PC version. 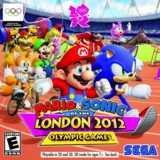