We take a look at the latest game to bring the Ultimate Fighting Championship home.

The popular mixed-martial-arts-league Ultimate Fighting Championship has been turned into a game several times over in the past few years. The series began back in 2000 with Crave at the publishing helm of a very successful Dreamcast fighting/sports game. Through the years, the series has come to all of the modern consoles at least once, and the latest entry, UFC: Sudden Impact, marks the second time the game has come to the PlayStation 2.

Development duties on Sudden Impact are being handled by Opus, the Japanese developer responsible for UFC: Throwdown. The series has gone to different developers over the years, but the game has largely remained unchanged. That's the case, too, with Sudden Impact, which contains many of the same modes as the rest of the UFC lineup. You'll see the standard tournament mode, the champion road, an arcade mode, and a versus mode. New this time out is a story mode, which is where you create a fighter and then build up his stats in a dojo to prep him for battle in the Octagon. While the story mode starts off with a bit of an actual story--which involves the fact that you're a fighter with no family, no money, and no hope--it quickly boils down to a bunch of basic menus and odd tutorial-like information.

The gameplay itself is pretty much what you've come to expect from the UFC. The game uses the same Tekken-like control system, assigning each of the PS2's four face buttons to one of your fighter's limbs. Hitting two buttons at the same time is used for grapples, submission holds, and other more-complex maneuvers. Ground-fighting and counters are still a very major part of the gameplay. A few more positions have been added to the game, which represent its most noticeable additions. The fence around the outside edge of the Octagon comes into play more this time around. You can slam an opponent up against the fence, and you can even get into a mounted position where one player's back is up against the fence. This addition adds another level of strategy to the game, thus making ring position more important than it has been in the past.

Graphically, Sudden Impact has a solid look to it, though eagle-eyed fans of the series will notice that most of the game's moves and animations have been lifted directly from previous iterations in the series. That isn't to say that the game looks identical, however. Fighters' faces will get beaten up over the course of a fight, and you'll see bruising or dried blood smeared across the faces and bodies of the models as battles unfold.

UFC: Sudden Impact doesn't stray far from the formula Crave and Anchor established four years ago. The gameplay is still as solid as it was back then, and the addition of more, new fighter positions is always a welcome change. UFC: Sudden Impact is scheduled for release in April. 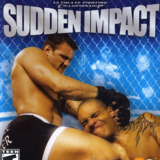