LOS ANGELES--At Ubisoft's press briefing, the French publisher lifted the veil on a couple of new projects. Rayman Origins, a mischievously humorous 2D side-scroller was announced, but the company also had another game in tow, tentatively named Project Dust.

A trailer for the title was shown at the end of Ubisoft's briefing, and details on the code-named project were scant at the time. The brief trailer, narrated by a deep, ominous voice, showed masked tribe members living through a series of cataclysmic events as a result of lost ancestral powers.

However, more clarity has now arrived, as Eric Chahi, creative director at Ubisoft Montpellier, gushed details on the code-named project. Chahi says the game is a spiritual successor to Peter Molyneux's PC god game Populous and is a result of a "technological breakthrough."

In the game, players become God and are tasked with saving humanity from the ubiquitous environmental disasters, which include tsunamis, earthquakes, floods, wildfires, and volcanic eruptions. Players will achieve this by manipulating water, land, vegetation, and lava, as if "playing sandcastles on the beach."

Project Dust is slated for a spring 2011 release on Xbox Live Arcade, the PlayStation Network, and the PC. 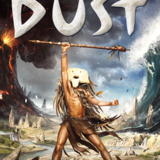