Video showcases the fourth Assassin's Creed game to be released in 2014; iOS title will be free-to-play.

Presented in a third-person 3D view, the mobile game is free-to-play and features microtransactions, but it appears that these are limited to character customisation and vanity items.

Key features of the new mobile game includes three different character classes to choose from, as well as a decryption system that can unlock numerous in-game items. Furthermore, players can hire their friends to help complete objectives by calling them at any point during a mission.

Ubisoft also claims that the game's visuals represent "a new milestone in mobile graphics"--you can take a look at the game in the video above (via TouchGameplay) and the new screens below.

Set during the Italian Renaissance, Assassin's Creed Identity sets its story missions in Rome's colosseum, Florence, and other famous locations. The game's hero is controlled either by virtual analogue sticks or tap-to-move instructions, while the missions are kept short to accommodate playing on the go. The game's iOS description page adds that Assassin's Creed Identity features randomly generated missions, each based on 16 different objective types.

Ubisoft adds that the game's minimum requirements is the iOS 7 operating system, and iPad 3 or iPhone 5. 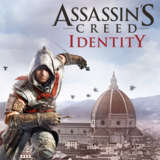