Publisher will bring the independently developed, whimsical MMORPG to the high seas of retail.

In late 2003, San Francisco-based developer Three Rings announced it was launching the beta for its massively multiplayer online role-playing game, Yohoho! Puzzle Pirates. The game took a much different tack than most MMORPGs, eschewing Dungeons & Dragons-style fantasy for a whimsical blend of cartoonish pirate action and puzzle-solving. Its quirky charm won it awards in the Technical Excellence and Audience Award categories at the 2004 Independent Games Festival and a distribution deal with Shockwave.com.

Now it appears the plucky little game is headed for the big time. Today Ubisoft announced that it had struck a deal with Three Rings to properly publish the game, which has been renamed Puzzle Pirates. The game will be released for Windows, Linux, and Macintosh this April.

According to Ubisoft, Puzzle Pirates "is expected to earn a T for Teen rating," will retail for $19.99, and will cost $9.95 per month to play. A free trial version is currently available from both GameSpot DLX and the official Puzzle Pirates Web site. However, the retail version will include a free month of playing time, exclusive items, and offline single-player versions of the game's most popular puzzles. 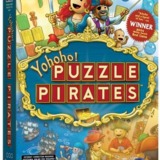