Ubisoft today announced that it will be publishing three games from Taito's library in North America and Europe. The publisher will localize the games for regional markets and put them on shelves in 2006.

The first game under the deal is the PSP game Exit, which was released in Japan this year. Exit is an action-oriented puzzle game with stylish comic-book-influenced graphics, and it will be available in the US and Europe in February 2006.

Gamers will slip into the suit of Mr. ESC, a man who specializes in the art of escapology and rescuing helpless citizens. Players will be challenged to save subjects from a variety of perilous predicaments, including raging fires, flooding subways, and collapsing buildings. Gamers will climb ropes, scale ladders, and move objects in more than 100 different scenarios, and additional levels will be available for download. 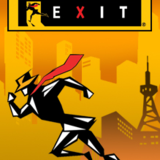