While the rhythm genre is hardly new, only recently have publishers and developers outside of Japan given it much of a serious look. The change occurred, of course, when the now-Activision-owned Guitar Hero franchise hit its opening chords in 2005, and subsequently rocked out more than $1 billion in revenues. Since then, a variety of publishers have boarded the bandwagon, with EA riffing with former Guitar Hero developer Harmonix on Rock Band, THQ throwing down Battle of the Bands, and Disney forming Ultimate Band, among others.

French publisher Ubisoft has already waded into the rhythm genre once in recent memory with Jam Sessions, a surprisingly authentic guitar sim for Nintendo's DS. The simulation crowd thus sated, Ubisoft is returning to the rhythm genre in a more arcade fashion, announcing the next installment in its best-selling tween-targeted Imagine series will be Rock Star, due out for the DS this June.

Instruments set to be replicated in Imagine Rock Star are the drums, guitar, bass, and piano, and the game will let players form a band, go on tour, earn money, and "become music legends." According to Ubisoft, players will have a variety of customization options at their disposal, and will be able to participate in photo shoots once their rockers are sufficiently glammed up. The game will also accommodate wireless jam session for up to four rockers.

According to an Ubisoft rep, Imagine Rock Star won't feature any mainstream artists. For more on Rock Star and the rest of Ubi's Imagine line of games, check out the publisher's Web site. 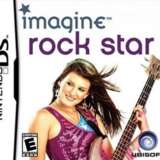