The free-to-play Division game has been delayed to a later date.

As part of Ubisoft's latest earnings release, the company confirmed delays for The Division Heartland, Rocksmith+, and Prince of Persia: The Sands of Time remake.

Heartland, Rocksmith+, and The Prince of Persia: The Sands of Time remake were previously scheduled to be released during Ubisoft's fiscal 2021-22, but now they are on the books for fiscal 2022-23. This means they will be released between April 2022 and March 2023.

As for Roller Champions, Ubisoft said the game is still on track for release during the current fiscal year, so it should be here by the end of March 2022, but it is "no longer factored in the guidance."

The developers of the Sands of Time remake released a statement on Twitter saying the game remains in development and the team is motivated by fan feedback. During an earnings call, management said there is no cause for concern regarding Heartland, and plans are underway for the game's next test.

An update from the Prince of Persia: Sands of Time Remake development team: pic.twitter.com/z9sFaBwz9N

Ubisoft acknowledged in its earnings report that it plans to struggle in the free-to-play department before it finds success. "Success may first imply failures, to grow and learn as the group constantly builds new skills, technologies, and capabilities. While there is more work ahead, Ubisoft is confident these organic investments will ultimately pay off and significantly enhance the scale and value of its biggest franchises," Ubisoft said.

During a call, management also discussed the free-to-play game Ghost Recon: Frontline, saying that although the response to the announcement was criticized by fans, the developer is sticking with the game and believes it can be a hit.

Heartland is a free-to-play game set in The Division universe that's in development at Red Storm. It is a standalone game, and Ubisoft says you don't need to know anything about the franchise to enjoy it. The game will have an "all-new perspective" on The Division series, and it takes place "in a new setting."

The original Division was set in New York with the sequel moving to Washington D.C. With the title Heartland, it seems the new game will head to the middle of the country.

In other news, Ubisoft's earnings report included new details on Assassin's Creed Valhalla, which is now Ubisoft's second biggest profit-generating game in the company's history. Far Cry 6 is performing well, too, it said, with average play time up 25% compared to Far Cry 5. 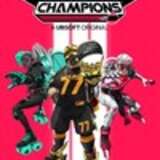