Publisher revives franchise purchased from 3DO; Heroes of Might and Magic V will be first full game in series since 2002.

When Ubisoft released its lineup for its upcoming fiscal year two weeks ago, it revealed plans for big-name games such as King Kong and the next editions of Prince of Persia and its three Tom Clancy franchises, Splinter Cell, Ghost Recon, and Rainbow Six. Lost in the shuffle was the resurrection of a classic franchise, the announcement of Heroes of Might and Magic V for the PC.

The Might and Magic name was purchased by Ubisoft from 3DO in 2003, when the now-defunct publisher went bankrupt.

Ubisoft today officially announced the upcoming Might and Magic game, set for release in early 2006. The game is being developed by Moscow-based game studio Nival Interactive, the team responsible for Blitzkrieg and Silent Storm.

Not much is known about Heroes of Might and Magic V, but a press release from Ubisoft stated that the game "will benefit from the features and characteristics that established the success of the initial saga" and will feature modern 3D graphics, a new combat system, and both online and offline modes. Ubisoft also launched the game's Web site today, which includes screenshots, news, and a fan forum.

During its lineup announcement, Ubisoft also announced another "product with [the] Might and Magic brand" but hasn't released any further details.

GameSpot will have more on the world of Heroes of Might and Magic V as information is released. 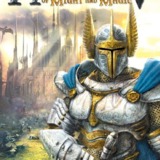