Ubisoft will remove imagery used by an anarchic terrorist group in the Tom Clancy mobile game that bears a striking resemblance to a Black Lives Matter logo.

Ubisoft has issued an apology for imagery used in the opening video of Tom Clancy's Elite Squad, and committed to removing it in an upcoming title update. The video featured the game's antagonist organization using a raised fist image, which critics said implied a connection between terrorism and the Black Lives Matter movement.

In a statement shared on Twitter, Ubisoft said the imagery was "insensitive and harmful in both its inclusion and how it was portrayed." It also said that the raised fist will be removed in a title update on September 1 for Android, and as soon as possible on iOS.

In the context of the game's story, the symbol appeared in relation to the anarchist group UMBRA. The organization is said to be exploiting civil unrest to generate chaos and undermine world governments. That prompted widespread criticism, especially in light of the Black Lives Matter movement generating protests across America in recent months. At least one contracted writer on the project said that he did not see the scene and would have called out the problematic aspects if he had.

Viewing the symbols side-by-side, the one used by UMBRA looks almost identically mirrored.

Ubisoft has also been facing controversy recently regarding its workplace culture, with accusations centered around a "frat house culture" of sexism and abuse. Several high-profile creative leads have left the company as it has reorganized and started to respond to the accusations. Some of the response has been notably unsatisfying, however. 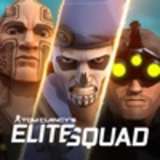