The French publisher buys the German company responsible for the Settlers and Battle Isle series.

Ubi Soft has announced the acquisition of Germany-based video game company Blue Byte Software. Blue Byte is the creator of two of the most popular series in the history of video games in Germany, The Settlers series and the Battle Isle series. The Settlers games are a well-known strategy game series; the next installment in the series, The Settlers IV, will be released on February 15, 2001.

Blue Byte was founded in 1988 by the current head of the company, Thomas Hertzler. The company develops, publishes, and distributes video games mainly in PC format. It operates in three countries-- Germany, the United States, and the United Kingdom--and it has a staff of 64 people. Blue Byte is the only German publisher to have launched a portal for online gaming, The Blue Byte Game Channel, which brings together a huge community of online players. In 2000, total sales for Blue Byte came to 9.5 million euros. The company's business plan currently projects total annual sales of more than 20 million euros.

"I am convinced that this operation is the right choice for the future of Blue Byte," Hertzler stated. "I have complete confidence in Ubi Soft's capacity to safeguard the unique features of our games. Ubi Soft's backing will help make our products better known because it will allow them to be adapted quickly to new generation consoles."

Yves Guillemot, president and CEO of Ubi Soft, added, "I am particularly happy with this acquisition. Germany is the country par excellence of strategy games, and Blue Byte's teams are the leading specialists in the field. Our goal is to invest in Blue Byte and to make available to them any tool they need to extend the influence of their leading products. Together we will endeavor to see to it that, having garnered such enormous success in Europe, these wonderful games will soon captivate players around the world." 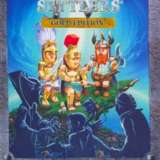