Two more Xbox 360 titles are now playable on Xbox One.

The Xbox One's backwards compatibility catalog continues to grow. Two more Xbox 360 games, Peggle 2 and Marlow Briggs and the Mask of Death, were added to the library today. As usual, the announcement came from Microsoft's Major Nelson on Twitter.

Both are digital-only Xbox Live Arcade titles, so if you bought them on Xbox 360 they should show up automagically in your Xbox One game library in the Ready to Install menu. Alternatively, you can download them from Xbox.com with these links (Peggle 2, Marlow Briggs) or directly on your console. One thing to consider here is that Peggle 2 already has a native Xbox One edition.

The addition of these two games follows four games from last week, including Persona 4 Arena, Cars: Mater-National Championship, Jewel Quest, and Tecmo Bowl Throwback. In addition to Xbox One, the backwards-compatible Xbox 360 games play on Xbox One X. 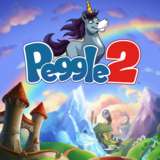