Lucid Games, creators of Destruction AllStars, may no longer be working on the rumored Twisted Metal reboot.

The unannounced reboot of Twisted Metal might have already had a change of developer, according to a new report.

VGC has reported that Twisted Metal development duties have moved from Lucid Games, makers of Destruction AllStars, to an unannounced Sony studio in Europe. Given that the game hasn't been formally revealed, neither Sony nor Lucid Games have provided a comment, but VGC sources suggest that the change might be down to Destruction AllStars' tepid reception.

The combat driving game was meant to launch with the PlayStation 5 for $60, before it was delayed shortly before launch for three months. When it did launch, Sony decided to offer the exclusive with PlayStation Plus, and only sell it for $20 thereafter. The player base for the game dropped after launch, forcing Lucid Games to implement computer-controlled opponents to ease server wait times.

Twisted Metal hasn't had a release since the game's most recent reboot in 2012, but Sony seems poised to bring back the series in a big way. A TV series based on the game was announced in 2019, with Sony mentioning the project again during CES 2022 last week. It's understood by VGC that the game is aiming to launch alongside the series in 2023, which gives development a tight schedule. 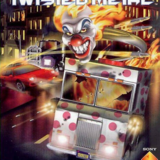