In March, Sony Computer Entertainment America marketing head John Koller said in an interview that the PSP would be playing other systems' games by the end of 2009. The executive's promise has already been kept, as the Japanese PlayStation Store has been updated with a quartet of TurboGrafx-16 games. The console, released in 1989 in North America, was called the PC Engine in Japan.

The initial batch of games includes multiplayer action game Bomberman '94, pinball title Devil's Crush, mascot platformer New Adventure Island, and Mahjong Sengoku. Each of the games is playable on the PlayStation 3 or the PSP and sells for ¥600 ($6.36), roughly the same price charged for TG-16 games on the Wii Virtual Console.

As of press time, Sony had not responded to inquiries about plans for TurboGrafx-16 releases on the North American PlayStation Store.

There is some reason for optimism about the retro system's games heading to international stores, and not just because Sony will want to pad out its offerings for the October 1 launch of the downloadable-only PSP Go. In the aforementioned interview, Koller said that regional disparities between PlayStation Stores will be corrected. At the time, the US and Europe had seen a few dozen games from the original PlayStation offered for download to the PSP, whereas the Japanese online store boasted a catalog hundreds of games deep. 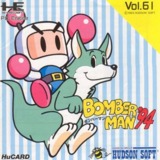