Don't be fooled by its cute visuals; Tunic is designed to be challenging both in how you understand its combat and how you comprehend its story.

Tunic is a game of secrets. Despite my best efforts, I wasn't able to discover many concrete details about what the game even was prior to the release of its Xbox demo--it looked like a Legend of Zelda-like starring a cute little fox. But after getting my hands on it, I discovered that Tunic's cute imagery belies a foreboding and tense atmosphere, as well as a compelling mystery at its core that will bring me back whenever the game fully launches.

As it turns out, the air of mystique surrounding what Tunic even is and what the game's story is about is all intentional. The game has been purposely marketed this way in hopes that players go into Tunic already thinking that there must be more to it than initially meets the eye.

"A really important part of playing the game that we want to impart to people is that feeling of mystery, is that feeling of being in a place where you don't belong, that feeling of taking a few tentative steps into this hostile place full of monsters and treasure, just knowing that there are cool things out there, but not knowing where to go first," designer Andrew Shouldice told me, following my time spent with the demo.

"When we talk about [Tunic], we say that there are three main things that we expect people are going to do in it," Shouldice said. "They're going to explore a big world, they're going to fight some monsters, and they're going to find some secrets. Kevin [Regamey], the audio designer on the project, made an entire game about hiding secrets in audio. And one of my favorite things is to slip around a corner unnoticed and find a treasure that nobody else has found before--those sorts of things are really important parts of what makes Tunic tick."

Games built around secrets are my favorite experiences, especially if the secrets are huge, optional pieces of gameplay and story content that no one but the most stubborn of detectives will find--think Hollow Knight, The Legend of Zelda: Breath of the Wild, Doki Doki Literature Club, and Full Metal Furies.

"We sometimes talk in percentages where we talk about how easy we want [a secret] to be found," Shouldice said. "Is this a critical path, 100% secret? Or is this a 10% secret where we want most people to not find it? How well do you need to hide something to make sure that it really is going to be a surprise for most people?"

"It's tricky," Regamey added. "Because if you trust that any given player will get a secret--like if you need every given player to find it, or you want them to find it--then you make it a little more obvious, but at the other end of the spectrum, there are secrets that are like, 'Is anyone ever going to find this?' It's that level of obscurity. Andrew and I lovingly refer to [the latter] as 'content for no one.' You make this thing, and before you even begin, you might conceptualize it first and before you even start working on it to make it real, you need to stop and ask yourself, 'Am I okay if no one ever acknowledges the work we put into this thing?' And, if so, then get to work and go for it."

Both Shouldice and Regamey know that developers have made what they thought were hard-to-find secrets before, and players have sometimes still managed to find them in a matter of days. "As a guy who has worked on plenty of what I thought were pretty obscure secrets that were found on day one or day three max, we're trying to break that record--maybe four days this time," Regamey said, laughing. But even knowing that, the team strove to create secrets that will hopefully take players months to find--if they're ever found at all.

With so much mystery surrounding Tunic, I asked if the team is at all worried about this indie game accidentally being so below the radar that it doesn't even attract the playerbase that wants to spend that much time trying to solve riddles and unravel mysteries. It's an issue that I know broke Cellar Door Games' Full Metal Furies, a fascinating riddle-based co-op game so well hidden behind a decent but not amazing action brawler experience that very few people actually played it, and most of those who did never thought to go looking for the secret second half of the game. According to the folks behind Tunic, it's all about marketing.

"I think [Cellar Door Games] said that they encountered some big issues with messaging prior to [Full Metal Furies'] release," Regamey said. "With Tunic, I don't think that we're going to encounter the same kind of issue because it's been pretty clear since day one and even just the first moment you boot the game up, you're like, 'Oh okay, there are things to uncover here.' So yeah, we're hoping that aligns."

That said, you don't have to be a hardcore secret hunter to enjoy Tunic. The team just hopes that there are players willing to take the plunge to look for what they've hidden. "I think that players will be able to play through this entire game without engaging with any real story if they don't choose to," Shouldice said. "But the hope is that people who like to hypothesize and dig deeper, there might be some enjoyable things in there for them as well."

Perhaps it goes without saying at this point, but I am one of those people. When I booted up the Tunic demo, I fell in love with the game as soon as I saw the menu, which takes on the form of an instruction manual. In Tunic, you slowly piece together this instruction manual, finding its pages and filling out your overall menu--one page covers the basic controls, for example, while another is a map for a dungeon. This doesn't provide you with an in-game GPS like most games, where the "map" tells you where you are at all times. Tunic's maps are actual maps--they are static pages with hastily drawn landmarks and paths drawn on them, so you have to look at your surroundings and trace your path in your head to figure out where you are. Think Hollow Knight's map. It's wonderful.

Shouldice said that the inspiration for structuring the menu this way comes from the love he has for the physical manuals that used to come with games back in the day. "I remember leafing through the Metroid II manual when I was probably, I don't know, five years old, 10 years old, somewhere in that vague vicinity," Shouldice said.

"And that feeling of this being a document, a map--a figurative or literal map to a world that exists inside this game and I'm just getting this little peak at it. And one of those manuals, the Zelda manuals in particular, especially the Zelda 1 manual, has just piles of little secrets hidden in it. And sometimes the secrets are cagey; they'll say, 'Oh, and there's a treasure hidden at dot, dot, dot. Oh, that's a secret.' It acknowledged the fact that it's not giving away everything right there. And so I really feel like the manual was kind of a part of the game."

Tunic's manual isn't entirely straightforward though. Much like the signs in the game and the choice-driven text prompts that pop up, the manual is written in an unknown language. This foreign language is designed to up the challenge of understanding Tunic, creating the sense that the player doesn't belong in this world.

And the team is planning for folks to eventually overcome the game's initial challenging aura and master aspects of it. As players slowly chip away at Tunic and begin to understand the ins-and-outs of its combat, discover secret means of navigating the world, and better comprehend its secrets, they'll likely find ways to sequence-break the game, making subsequent playthroughs faster.

"Kevin, for instance, also does speedrunning and so bringing his expertise into this and figuring out terms like routing and optimizations and stuff like that are all the sorts of things that also work into providing challenges that can be approached from not just a slow, tactical 'let me think about this, let me carefully evaluate using all my resources' [playstyle], but also just perfect execution and coming up with reasonable solutions to all the encounters from those different perspectives," Shouldice said.

"Or creative solutions," Regamey added. "There for sure are going to be some sequence breaks or something that someone finds someday. We're not designing [Tunic] for speedrunners. I wouldn't say that's our core audience or anything, but it's certainly part of the audience--I like the idea of there not even being a critical path, like you're just in this world that maybe you don't belong in. And if you find some interesting way around the critical path, it's like, 'Well, why isn't that valid?'"

"We aim to have situations where the player will play for a while, find themselves in an area hours into the game and then think back and realize, 'Wait a second. I could have gotten here from the very start if I play my cards right and I'm brave and I'm really good. This can be the first encounter that I actually have in the game. I could go here first instead,'" Shouldice said. "And that might not work out very well for you in the end, but it's possible."

In my time with the Tunic demo, I couldn't find any of these possible shortcuts, but that doesn't mean they weren't there--they're meant to be hidden, and I just probably need more time with the game. It's unclear when I'll get that opportunity, but Shouldice seemed to imply that the release date reveal could be soon. Tunic is scheduled to launch for Xbox One and PC. 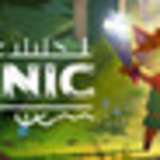