We test-drive a work-in-progress version of Sega's PSP racer.

TGS 2005: One of the longest lines at Sega's Tokyo Game Show booth today was for the anime-inspired PSP racing game Initial D: Street Stage. The demo version of the game on display let us race one-on-one against a CPU opponent over four laps of a circuit that took a little under a minute to get around.

The layout of the circuit wasn't unlike those that you might expect to find in a Ridge Racer game, with plenty of hills and long sweeping corners, but its appearance was more realistic and detailed. The road surface, for example, boasted some excellent textures that looked equally good both when the car was stationary and when it was racing at top speed. Our only minor criticism of the game's visuals, in fact, would be that the same texture used to make the road markings look worn was repeated over and over again, which made the white and yellow lines look a little strange when driving at speed.

The sensation of speed, incidentally, was excellent and was no doubt helped by the fact that we were playing from the perspective of a camera mounted on the hood or front bumper of the car. A rear-view mirror at the top of the screen made it easy for us to keep tabs on our opponent when he got too close for comfort, and the rest of the time we were able to check the distance between our two cars on the heads-up display--which also incorporated a speedometer, a circuit map, and lap times.

The handling of our car fell somewhere between arcade-style and realistic and was quite easy to come to grips with. We were able to corner at speeds that would invariably result in our going off the circuit in a game like Gran Turismo, for example, but we definitely felt like we needed to drive with a little more caution than we would in something like Ridge Racer. We'll bring you more information on Initial D: Street Stage as soon as it becomes available. 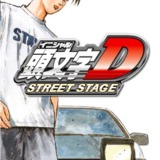