"El Presidente wants it all…and now he has it!"

Kalypso on Wednesday announced the Tropico 5 Complete Collection. As its name suggests, this "definitive" edition of the 2014 strategy game comes with all previously released expansions and an assortment of DLC packs.

The two expansions are Espionage and Waterborne, while the 10 DLC packs are listed below.

The Tropico 5 Complete Collection launches as a download via Steam on January 29. The boxed version, meanwhile, will debut on February 2 in North America for $40.

"Tropico 5 - Complete Collection contains more extras than a typical Tropican employment contract and ensures that even the most budget-conscious of wannabe-dictators can get their dynasties in full-swing without having to raid their Swiss bank accounts for extra funds," the publisher said.

In addition to PC, Tropico 5 is available for Xbox 360 and PlayStation 4. An Xbox One version is in development, but has not yet been released. The Complete Collection has been announced only for PC.

For more on Tropico 5, which GameSpot scored an 8/10, check out our review. 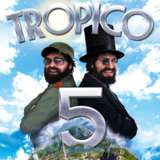