You could say that the film Tron did a good job of typifying the 1980s--it had frizzy-haired men, greedy corporations, a helicopter landing on a rooftop, and people throwing away hours of their lives each night on a new fad called "video games." It's been more than 20 years since the motion picture's premiere, and Monolith Productions and Buena Vista are now hard at work on a game-based follow-up to the movie. Tron 2.0 will be a first-person action game that will follow the motion picture closely, but will also have pretty much everything you'd expect from a first-person shooter, plus several unusual new features and gameplay modes, like the lightcycle racing and disc battles featured in the movie.

Currently, Tron 2.0 is in a prebeta state, but even at this point (just as when we last saw Tron 2.0 at the 2003 Game Developers Conference), the game looks extremely impressive and totally distinctive. There is simply no other modern-day action game that looks anything like Tron 2.0. The game takes place in a digitized world much like the one that Jeff Bridges' character Flynn explored in the movie, and it looks the part, thanks to a distinctive DirectX-based glow effect that Monolith and Nvidia have developed specifically for the game.

All the game's characters and environments are lit with this eerie glow, and the effect seems to work extremely well with the imaginative-looking levels we've seen so far. Since you play as a human being who has been zapped into a digital world, just like Flynn was, you'll explore several different computer platforms, from a PDA handheld computer and a laptop to a desktop computer and a mainframe.

You'll do this exploring as Jet Bradley, son of Alan Bradley (Bruce Boxleitner's character from the movie). Mr. Boxleitner actually reprises his role in Tron 2.0 as an older, wiser Alan Bradley who's become a senior engineer at the same company his Tron program once opposed. Alan is abducted by an evil, Internet-based, non-GameSpot company known as Future Control (or fCon, for short). fCon has learned about Bradley's revolutionary digitization technology--which is contained in a highly advanced artificial intelligence routine called ma3a (pronounced "ma-THREE-uh") and essentially turns human beings into computer programs--and abducts Alan in order to acquire the technology. fCon has plans to digitize a group of elite hackers, turning them into creatures called "data wraiths" that will wreak havoc on computer systems around the world, stealing top-secret data and wrecking the databases of their competitors.

Jet catches wind of his father's abduction, but before he can figure out what to do about it, the ma3a program automatically runs Alan's contingency plan: digitizing Jet so the young man, as a computer program, can defend ma3a against computerized invaders personally. Unfortunately for Jet, he's been beaten to the punch by J.D. Thorne, a former high-ranking security officer and contemporary of the Bradleys. Thorne tipped off fCon to the digitization technology and later brokered a deal to sell it to the rival company, and he was improperly digitized while attempting to demonstrate the technology and now exists as a corrupted computer program. The corruption made Thorne insane and dangerously contagious. Of course, you'll also run into the hostile intrusion countermeasure programs (ICPs) from the motion picture. Though the red-glowing ICPs aren't evil, they're essentially the policemen in the world of Tron 2.0, and they're assigned to swiftly eliminate any rogue programs. And as Jet, you'll just happen to be a rogue program.

As you might have guessed, you'll be up against some tough odds in Tron 2.0. Your goals are to rescue your father, stop fCon, neutralize Thorne, and get back to the real world. Fortunately, you won't be alone, since you'll be joined by companions like Mercury, a female bot (a standard program, much like Cindy Morgan's Yori character from the movie) who happens to be a champion lightcycle racer, and Byte, a floating, talking, polygonal program descended from Bit (the floating, beeping, polygonal program from the motion picture). Jet will even receive help from ma3a herself, though in some cases, he'll have to be the one to protect ma3a, especially since fCon is after her digitization data.

I Give You All My Power

Jet will also enjoy a few unique advantages, since he is himself a "user" (an actual human being), just like Flynn was. Most notably, he'll be able to use all four of the basic weapon types in Tron 2.0, including the rod-shaped weapons used by lightcycle bots, the ball used by Thorne and his infected army of corrupt programs, the net used by fCon's data wraiths, and the classic disc weapon used by ICPs and users like Jet and Flynn.

Though a four-weapon arsenal may seem like it would be insufficient, it isn't, thanks to modifying items called combat subroutines that Jet will find every so often, either by pulling them from core dumps (the remains of defeated enemies, which can also contain health and weapon energy power-ups) or by finding them in hidden bins. Different subroutines greatly modify the function of each of your weapons in Tron 2.0. For instance, the lightcycle bots' rod weapon is a close-range, taser-like weapon by default, but the suffusion subroutine turns the rod into a powerful, close-range weapon as effective as any real-world shotgun, and the LOL subroutine turns the rod into a long-range sniper weapon.

As a user, Jet also has access to a sizeable inventory, which he can use to store weapons, subroutines, and various other items. However, even he is limited by his environment--in the cramped confines of a handheld PDA computer, he can carry only a few items, though he'll eventually travel to a huge mainframe, which will expand the size of his inventory and the number of subroutine slots he has available. In addition to combat subroutines that modify his weapons, Jet will be able to carry armor and utility subroutines, which offer additional protection from enemy attacks and corrupting viruses and provide you with a number of miscellaneous skills, respectively.

Tron 2.0's subroutine system is intended to let you play the game as you wish. If you want to fight your way through every area, you might look for armor and combat subroutines to improve your chances of survival in head-on combat. However, if you want to try sneaking past your enemies using stealth, you might look for utility subroutines like fuzzy signature, which muffles your footsteps as you walk. In any case, you'll want to look for upgraded versions of each subroutine. Picking up a low-level alpha version of a subroutine will take up three subroutine slots, while a beta subroutine will take up two, and the gold version of a subroutine (the best version you can get) will take up only one, leaving you with more space to use other programs.

Jet will even be able to increase his own performance rating by completing specific objectives. He'll begin the game as Jet 1.0, but will eventually upgrade himself to Jet 2.0, Jet 3.0, and so on. When he does increase his performance rating, he'll be granted "build points" that he can spend to increase his attributes, similar to the experience system in No One Lives Forever 2. Jet will be able to improve attributes like health, weapon efficiency (the amount of weapon energy he uses for every shot fired), and data transfer rate (how quickly Jet can assimilate new programs--a vital skill when he's downloading critical data from enemy terminals while under fire).

In Tron 2.0, you won't just be running around, shooting enemies down or sneaking past them. For instance, at a certain point in the single-player game, you'll unlock the lightcycle circuit, a single-player game that you can return to at any time. Like other, more traditional racing games, the lightcycle circuit will let you unlock different tracks and new and different lightcycles with different properties, including base speed, turning, and maximum acceleration. The new lightcycles are being designed by artist Syd Mead, who also provided the design for the original Tron lightcycle (which you'll begin with by default).

If you remember the lightcycle races from the original movie, you'll know that the races themselves resemble the classic computer game Snake. Like in Snake, Tron 2.0's lightcycles constantly speed forward, leaving behind an opaque trail that destroys any player who crashes into it. The idea is to hedge in your opponents with your lightcycle's trail, forcing them to crash before they can do the same to you. If you absolutely, positively insist on having a 3D version of Snake, you'll be able to zoom the camera back extremely far and go at it, but you'll probably be better served using your mouse to zoom in on the action, since the lightcycle races in Tron 2.0 will actually have various environmental features and hazards, like turbo zones and slowdown areas, as well as pick-up items and weapons you can use to cut through a trail, speed up your lightcycle considerably, or even steal items from other racers. The lightcycle races will definitely be challenging, especially since you may find yourself racing against up to seven other computer-controlled racers, but if you do well in the circuit, you'll actually be able to put together your own racing series with your own rules and conditions.

And in addition to its substantial single-player game, which will consist of 30 different levels, Tron 2.0 will have five multiplayer levels for use in its two main multiplayer modes. Tron 2.0's disc arena will resemble a traditional first-person shooter deathmatch mode, pitting players against each other in head-to-head combat. However, the game's other multiplayer mode, tournament, places opposing players on opposite sides of a gaping chasm, exactly like the disc duels in the movie. In this mode, much like in Midway's classic 1983 arcade game Discs of Tron, you'll play as a program armed with a disc, with the ability to hurl your disc at your opponent or use it as a shield to block incoming blows. If you take too many direct hits, or fall in the chasm, you lose. The game's different multiplayer maps will allow for some interesting strategies. In one map, you'll play on opposite platforms, each of which has a series of small vertical walls that you can hide behind. These platforms will offer protection from direct assaults, but your opponents will also be able to bank a shot off the wall behind you to hit you in the back. In another level, you'll actually be able to hurl your disc to at the platforms your opponents are standing on, causing them to fall into the pit and lose.

Tron 2.0 has looked more and more intriguing each time we've seen it. The game itself is scheduled for release this August, but in the meantime, be sure to watch our exclusive new video trailer for the game. 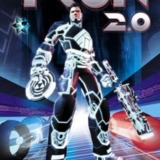