While much of the working public hates Mondays, retro gaming fans who happen to also be Wii owners can't wait for Monday morning. That's because Nintendo uses Mondays to release the latest offerings for its Virtual Console.

Today, three new games spanning three distinct genres were made available for download. Leading the pack is Tennis, which originally appeared on the Nintendo Entertainment System. The game simulates its namesake, can support two players, and costs 500 Wii points ($5).

Space Harrier II lands on the VC for 800 Wii points ($8). Originally appearing on the Sega Genesis, the game features the titular hero doing battle against waves of enemies in a 3D landscape.

Military Madness has been ported to the Wii from the TurboGrafx-16 console and costs 600 Wii points ($6) to download. The turn-based strategy game is set on the moon during a future war and features 16 stages.

One of the titles confirmed for release next week is the Sega Genesis' Toe Jam & Earl. For more on the Virtual Console, check out Nintendo's Virtual Console Web page. 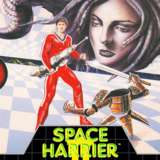