We get to play some of the single-player battles in the eagerly awaited action game.

Tribes: Vengeance is the eagerly awaited third game in the groundbreaking Tribes series, and publisher Vivendi Universal Games was in attendance at the Game Developers Conference to show off the latest version of the game at the Microsoft DirectX 9 booth. Tribes is a first-person action game set in the future; your character wears a powered armor suit with a jetpack and leaps around futuristic landscapes and environments battling a variety of enemies.

Unlike the first two games in the series, Tribes: Vengeance will feature a single-player campaign; the previous Tribes games focused mainly on multiplayer. We were able to try out the single-player game for the first time at GDC, and we got the chance to check out some of the new gameplay that's being working on.

In the first level we played, we took control of a character named Daniels. In the game, your mission in this level will be to get an audience with the emperor. However, you have to first prove yourself in the gigantic deathmatch arena. So, clad in medium power armor and aided by a couple of computer-controlled allies, you'll have to battle it out against waves of increasingly tougher opponents. Your AI allies can jump into stationary turrets and provide support fire while you battle it out against the opponents.

In the second level, we got to play as Julia, another of the game's lead characters. Julia wears light power armor, so she's among the nimblest of characters. This added speed is definitely helpful, since in this level, she must assault an enemy base that could almost be described as a vertical hive. Using your jetpack, you have to descend from level to level, eliminating the defenders on each level in order to reach your objectives. The level design of the base is impressive, filled with plenty of curved surfaces and other highly detailed scenery, like metallic grating and barrels that can be knocked about by weapon fire. The curved walls of this level also afford plenty of opportunities to practice "skiing" across walls and surfaces to pick up speed.

Some of the AI opponents were especially crafty; in particular, we chased some enemies into an area filled with crates. When we attempted to cut them off, they leaped atop some of the crates suddenly and caught us by surprise, then bounded away before we could react. Other opponents stood their ground, which made it easy for us to launch an explosive disc at their feet.

The weapons remain very familiar; the minigun has a high rate of fire but needs to land a lot of hits in order to kill. The weapon has metal fins on its sides that act as passive heatsinks, so if you hold down the fire button and spray fire continuously, these fins heat up and begin to glow red. At this point, the weapon will malfunction if you continue to fire. We also used the shotgunlike blaster, which scattered a spread of fire but packed a powerful punch against close-in targets. And, of course, there was the spinfusor--the traditional Tribes weapon, which is best described as a launcher of powerful, explosive discs. This was our most powerful and effective weapon by far, and it let us rack up kills easily once we figured out how to compensate for aim in flight. The controls were very smooth, and it was easy to master the use of the jetpack to achieve limited flight.

So far, everything looks very promising for Tribes: Vengeance. According to producer Chris Mahnken, the game's development is still on schedule. The team expects to have the game ready by the end of the year. 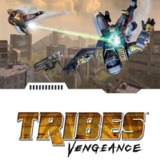