The World Serpent Jormungandr is the next massive mythological creature players will face down in Tribes of Midgard.

Another huge mythological creature is headed to Tribes of Midgard to try to bring about the end of the world. The game's next season is the Serpent Saga, and fittingly, the season's new saga boss is the ludicrously large World Serpent, Jormungandr, and you'll need to venture out into the seas to fight it.

Tribes of Midgard's second season drops this week, bringing a bunch of new changes to the game--including a new biome, a new shipyard structure so you can make yourself some boats, and the ability to swim. Everything you do in Season 2 will culminate in a battle with the saga boss, Jormungandr, which looks like it'll put your Viking tribe through its paces. Not only will you have to venture out across the new Open Seas biome to find the World Serpent, but you'll have to face it on a narrow ring-shaped arena, where real estate will be at a premium. The snake belches big globs of poison onto the arena that will damage you if you get caught in them, and it'll make some big attacks with its tail, as well.

Developer Norsfell describes Jormungandr as putting up a fight that's pretty different from the first season's Saga boss, Fenrir. Where Fenrir was more mobile and could call on smaller enemies to help him out, Jormungandr is more stationary, so you'll always know where your target is. The difference is, you're going to need to keep on the move and search for good places to mount an offense, because the boss's attacks tend to cover the arena in poison that depletes not only health, but your Mana as well. So while it might be easier to get close and hit Jormungandr, the boss is going to force you to dodge away a lot.

Tribes of Midgard is all about staving off Ragnarok, so Jormungandr's inclusion makes a lot of sense from a story perspective--this is the giant creature that eventually marks the end of the world in Norse mythology. The serpent is destined to face off against Thor in a final battle, but it seems you've got the opportunity to alter destiny with your group by taking on the serpent and defeating it.

While Jormungandr is new this season, you'll still be able to fight Fenrir if you so desire. To engage with either Saga boss, you'll have to complete the steps necessary to unlock it, and if you want an extra challenge, you can try to defeat both in a single run of the game.

Serpent Saga launches on December 14, and is included with both the standard and deluxe editions of Tribes of Midgard--so if you've already bought the game, you're good, and if you choose to do so now, you'll get both seasons as part of the package. 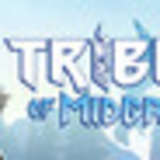