Trials Evolution: The Game Trials Was Meant to Be

Back in 2009, RedLynx estimated its game Trials HD might shift 500,000 units in total. Here in 2012, the physics-based motorbike racer has some 2 million sales to its name, making it a surprise hit and one of Xbox Live Arcade's most successful ever titles.

This success came of Trials HD's addictive, instant-restart action overshadowing some significant deficiencies. There were leaderboards but no multiplayer. There was a track creator but no way to share tracks outside of your friends list. Environments were all variations on the same warehouse theme, limiting level furniture to the same old planks and barrels. It also caught flak for a difficulty curve as steep as the nigh-on vertical slopes of its tougher tracks.

Trials Evolution, the sequel due this spring, squares up to those shortcomings pretty convincingly. The gameworld has exploded out of the gloomy warehouse, there's local and online multiplayer, and now there's proper sharing for created tracks. All of which potentially makes this not just the next branch on Trials' evolutionary tree but the very game Trials HD should have been.

Though the superbly tuned physics of the previous game are left all but untouched, the graphics engine has been souped up to render Evolution's newly expansive landscapes. The 60 or so tracks are set across portions of a huge map, with 8 square kilometers that take in hills, valleys, rivers, and roads, as well as urban and industrial-looking areas. The upshot is a visual variety lacking in Trials HD, with each of Evolution's tracks given some visual gimmick or light "story" hook.

One level, Downhill Dominator, stars a colossal wooden roller coaster of a track, featuring some of the biggest jumps and drops in the game (the suspension on the bikes has been tweaked to better handle long falls). Freed from the confines of HD's narrow warehouse, Evolution's driving lines also weave in and out of the screen, though the action is still primarily left to right.

Another track is a ride across the top of a collapsing dam. Another is set on a wrecked oil field, with fighter jets zooming overhead. One track bizarrely re-creates Saving Private Ryan's Omaha landing, stretching from bombed-out shoreline to concrete beach bunker. And then there's a swamp, sewage works, and a graveyard of ancient stone giants. Even for players with zero interest in sharing their own tracks or multiplayer racing, the diversity of tracks makes a world of difference between Trials HD and Evolution.

For those itching to race real people, there's four-player action available locally and online, across 12 tracks with four parallel lanes. If you drop off the left side of the screen, you respawn on the right with a point deducted from your score, keeping everyone on the same screen. It's a lot of fun, especially with a risky bailout finish; you can overtake the lead racer at the last moment with a bailout, which still punts your rider off the bike like an invisible ejector seat. But if you bail too soon, you won't cross the finish line or respawn, leaving you with no points at all.

The four-lane racing is also an exercise in concentration. When all four players are bunched up--crashing a lot and obscuring each other's riders--it's tricky to be the guy in the furthest lane. But you at least take it in turns to be in the lane closest to the camera.

Away from the dedicated, four-lane tracks, you can race other players online in ranked matches (across the tracks that come with the game) and unranked matches (across any custom-made track). Here, you race on the usual single lane against real-time "ghosts," that is, just a marker indicating your online opponent's real-time position.

Like the gameworld, the track editor has expanded almost beyond recognition. In the "Lite" editor, you just place a start and end marker somewhere on the game map, so your ride is dictated by the terrain along the line between them. To that basic track, you can add custom-colored ramps and obstacles or any other of the thousands of bits of track furniture.

The "Pro" editor, on the other hand, contains the exact tools with which RedLynx's own designers create tracks. There's a terrain editor for forming hills and the like, as well as a visual scripting system to let would-be level designers create a sophisticated, triggered series of events. With full camera control to boot, the editor's power and flexibility appear equivalent to that of Little Big Planet 2, letting creative types cook up games from entirely different genres. So far, we've been shown a jury-rigged first-person shooter (with bull's-eye targets rather than zombies or what have you), a side-scrolling jetpack game, an Angry Birds clone, and a top-down spaceship shoot-'em-up, all built with Trials track props.

More important than those exotica is RedLynx's new system for sharing and discovering user-made tracks. The previous game had no server storage for custom tracks, so these could only be shared directly with Xbox Live friends; this was a frustration for players and apparently the developer alike. That's been fixed none too soon. Created tracks can now be found sorted by Most Downloaded, Highest Rated, and the like in Track Central or searched for by difficulty, creator, and theme tags.

As for remedying the exponential difficulty curve of Trials HD, Evolution adds new layers of meta-game rather than producing easier tracks. Now, there are set events (themed groups of tracks of comparable difficulty) and licenses that must be earned to access them. The idea is that meting out the progress of players and teaching them new tricks in license tests will keep them from scraping hurriedly through tough tracks to find themselves stuck in the expert-level content.

For all of its flaws, Trials HD had a skill-obsessed purity. The simple, similar locations took a backseat, while skilful, physics-based riding came to the fore. In its new diversity, Evolutions might have a few dud curiosities--like the wobbly, droopy handling in its UFO-flying skill game--but we're betting they'll be eclipsed by the improvements everywhere else and other, more spectacular curiosities. One track resembles a motorbike stunt course through Inception's impossibly curving, shifting cityscape, so we're looking forward to it.

Like HD, Evolution is destined only for Xbox 360's download store; for now, at least. RedLynx's creative director Antti Ilvessuo doesn't rule out more Trials titles for other platforms and points to the studio's enthusiastically multi-platform history, "We have always been a multi-platform studio; RedLynx has been making [games] for PC, PSN, DS, you name it, every platform. So let's see what the future brings." 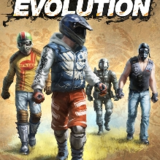