Say hell to Anchors in the Drift.

Scribblenauts and Drawn to Life developer 5th Cell has announced a brand new game. A PC title called Anchors in the Drift, it definitely goes in a different direction than the company's most famous games.

Anchors in the Drift has been in development for more than a year and has now entered full production. 5th Cell is hoping to fund the game on the new crowdfunding platform Fig, which offers both reward-based funding and equity investment. They're looking for $500,000 to get the project going.

Here's the overview for Anchors in the Drift:

"Anchors is set in a universe where an inter-dimensional empire, the Domain, has invaded Earth collapsing time and causing islands from different civilizations to be spread across a quantum ocean known as the Drift. Now Heroes from all generations, called Anchors, must sail this infinite sea to liberate these islands."

Players will search through "dynamically generated" islands, called Remnants, which are scattered throughout the Drift, as part of their effort to free them from the Domain.

"Once a Remnant is chosen players choose an Anchor from a set of classes and an Ability Loadout of abilities they’ve created from collectible cards called Arc Mods," 5th Cell explained. "Liberating a Remnant gives players leaderboards, XP and loot for their characters."

Anchors in the Drift is a free-to-play title in development for PC only. Click through the images in the gallery above to get a closer look at the game. Even more details are available at the game's Fig page. The game is due to launch in summer 2016; supporting it with $10 or more gets you access to its upcoming beta.

As for the funding platform, Fig differs from platforms like Kickstarter and Indiegogo in that it offers both rewards-based backing as well as equity to accredited investors. More information about the accreditation process is available here. In addition, the platform only supports one game at a time.

The first game funded on Fig was Mobius Digital's Outer Wilds, which attracted more than $800,000 across accredited investment and rewards-based support.

The most recent Scribblenauts game was 2012's Scribblenauts Unlimited for Wii U. Overall, the franchise has sold over 13 million copies. 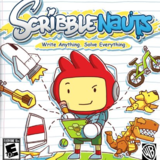